Weather: Got out late afternoon when it was mostly cloudy, before clearing sky near sunset. Partly cloudy sky for the first part of the day. Gusty winds in the valley bottoms and strong gusts at treeline in the afternoon. New snow swirling around in places and pluming off the high peaks in the Ruby Range.
Snowpack: Tiger stripes and lots of stripping. We’re talking about the new snow. It was striped, stripped and loaded. Got some time looking at the alpine in the Ruby Range above Irwin during the late afternoon. Southerly and northerly facing terrain had lots of stripping in general, with loading along gully features. Easterly and northeasterly facing slopes definitely looked that fattest in the alpine. Used a snowmobile to push on a number of wind loaded pockets up to 11,700ft on southerly and easterly facing slopes with no results. Some of those wind-loaded pockets were easily up to 12″ deep with new snow, but fairly small in the terrain. Finally got some cracking in the new snow at 12,000ft on a northerly facing wind-loaded pocket. Never the less, hit some good pockets and steep slopes with a 500 pound object with few signs to instability. The game continues…

Totally different story on below Axtell on it’s northerly side. Punchy faceted ugly structure, simulating the less snow favored areas around crested butte. Traveled between 9,400ft and 10,600ft in this area on northerly and westerly facing slopes. This is below treeline in elevation with lots of near treeline type of characteristics in the terrain. The snowpack in general was just an ugly version of Continental. Found the most concerning Persistent Slab snowpack structure for our who forecast area. But still, few signs to instability on some suspect terrain features.

SNOWPACK PROFILE FROM THE MT AXTELL PORTION OF THIS OBSERVATION. HORRIBLE PERSISTENT SLAB STRUCTURE BUT NO SIGNS TO INSTABILITY WHILE TRAVELING THROUGH IT. ECTPH SP AT THIS LOCATION. 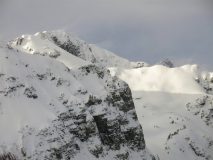 SNOW PLUMES OFF THE HIGH PEAKS IN THE RUBY RANGE IN THE LATE AFTERNOON. 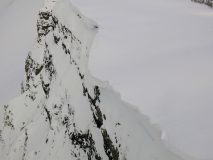 EXAMPLE OF SOME OF THE BIG CORNICES HANGING OVER SOME SLOPES. NORTHERLY FACING SLOPES IN THIS EXAMPLE.