You are standing on top of that virgin line, with that cold, crisp air blowing across your face, the squeak of the snow underfoot, the sun casting long, buttery shadows across your prospective line. The avalanche danger is rated considerable. You have that little high definition camcorder stuck to your helmet, and your two other buddies are peering over the steep line you all have worked all day to get up. Sound familiar?

Humans are inherently curious, emotional, and social creatures. We can study the snow with a microscope, wax poetic about theories on growth of snow crystals, fracture mechanics, blah blah blah. Snow and avalanches in a physical sense is solvable through cold labs, electron microscopes, slow motion cameras, and when all else fails…smart Swiss scientists. But, the human side of things…the emotion, lack of rationale, rushed decisions, and group heuristics is anything but clean cut. Ian McCammon P.hD., a very telented scientist and avalanche practioner, boiled down the bare bones of subconscious human decision making in the backcountry to six categories; Familiarity, Authority, Social proof, Commitment/consistency, Liking/conformity, and scarcity. This research was conducted in the late 1990s and early 2000s, not long ago in most people’s memories, but in the technological world, a decade is an eternity. Just thinking in Apple terms, the iPod was released in 2001. The iPhone released in 2007. These devices and many others we introduced a few years after these heuristic papers were presented and since then have skyrocketed in popularity, both in the front country, and the backcountry.

Now enter the GoPro. The seemingly generic name for all things photo, audio, and video capturing. You got the GoPro, the Contour, the Action Cam, the Air Pro, Parrot, the Hero, the JVC Flash Memory Recorder, the Phantom 2, the VIRB, the PivotHead, on and on they go. How do these little widgets effect our decision making in the backcountry? 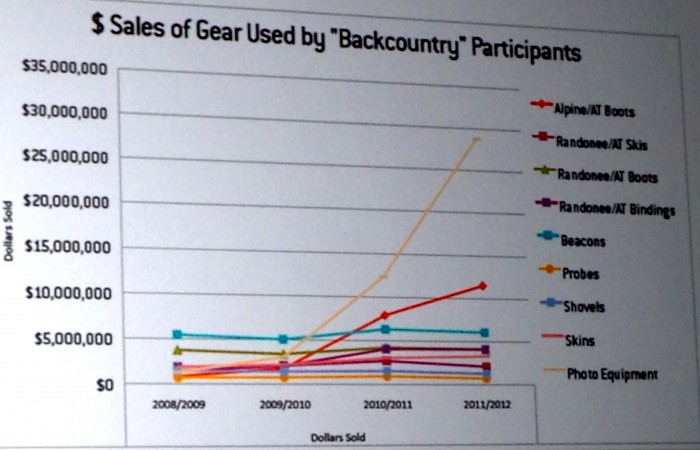 Graphic from a recent SIA study, presented at ISSW 2014 in Banff, AB.

This influx of technology has undoubtedly changed the way we operate in avalanche terrain.   Social media outlets such as Instagram is just kerosene on the already raging bonfire, especially among the 16-35 year old age bracket, statistically the age range which comprises a vast majority of avalanche fatalities across the globe. 65% of fatalities from 1951 to 2013 to be exact. Avalanche terrain + abundant powder + youth + bragging + proof of taking chances for said bragging = more close calls and ultimately, fatalities. Very little concrete GoPro-specific research has been done to date, but, if point of view (POV) videos of avalanche involvements are any gauge, the statistics may be staggering. Worth keeping in mind next time your standing on top of the primo slope asking your buddy if that little red light is blinking…