Avalanches:Visbility was obscured for much of the day but had a few glimpses into near and above treeline terrain and observed just one avalanche that I would guess failed maybe on Friday on a drifted near treeline slope the faces northeast. Looked to be about D1.5 on a very drifty feature below a cornice.

Weather: Mostly cloudy skies after about 10am with on and off snow showers. The sun was often visible through the cloud cover and green-housing was felt multiple times during the day. New snow accumulation during the day through 330pm was about 2 inches. A brief period of sunshine early in the morning shortly after sunrise was enough to moisten the snow surface on slopes with any exposure to the sun including northeast.

Snowpack: Poked a number of holes on northeast, east, southeast, south, southwest, and west-facing slopes between 10,000 and 11,700 feet. Settled storm snow was generally in the 20 to 24 inch range. At a location with 22″ of storm snow I measured 1.9″SWE at noon.

On slopes that faced east through south through west, I found the storm snow was bonding much better than the day prior. CT’s, ECT’s, and hasty hand shears were not able to produce any results on top of the crust sitting below the storm snow. I made several attempts to identify faceted grains but couldn’t. The slab appears to be bonding reasonably well. No cracking was observed.  Southeast through south through west slopes had crusts strong enough carry the current new burden. East facing slopes around 11,000′ had a thinner crust but there were frozen ice columns beneath for several inches. East and southeast slopes had a few inches of moist snow from this morning’s sun near the surface. South and west slopes had a soft crust buried beneath four or five inches of dry snow that formed during yesterday’s brief sunshine in the afternoon.

Slopes that tilted more north of east were a different story. There is a soft thin crust at the new/old interface with a very thin layer of facets immediately above. Test results were ECTN 12,13 at the new/old interface on this slope. Slab hardness is mostly fist and 4finger with a small amount of 1finger right above the new/old interface. Slopes with this structure may present the chance for triggered avalanched longer than slopes on the south half of the compass. The snow beneath the crust was also slightly faceted but most of this snow was graupel-ly precip. This layer may be worth watching with more loading. 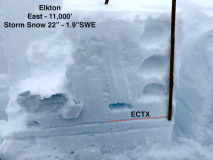 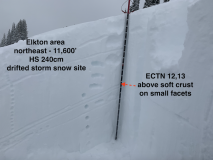